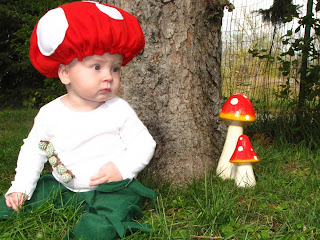 I decided that for our son's First Halloween I must make him a unique costume. He makes for an adorable mushroom! You might recognize the mushrooms in this shot, as I swiped them from his nursery. This costume was quite simple, only took a couple of hours and used common things you have in your kids closet and sewing room scraps.

I made the mushroom hat by using a cheap beanie I found on clearance ($2.99 at Gap). It saved me time because it already fit and stayed on, so it served as the perfect lining and shape for my mushroom cap. I stuffed it with socks to hold the shape while I added scrap batting from a previous project to give volume. 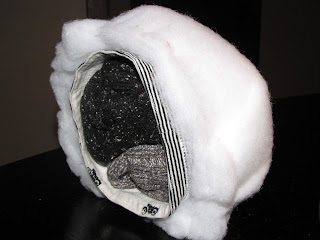 I next draped red fleece fabric over the shape and pinned white cut out spots to create the look I wanted. I took the red fleece with pinned spots to the sewing machine and sewed them on. I didn't bother finishing off any of the edges as I felt the fleece had a clean look even unfinished. (I used the Blizzard Fleece from Jo-Anns by-the-way), plus this only made the process faster. 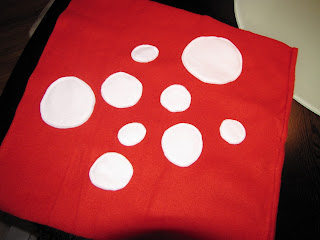 Next, I just draped this over my batting-covered hat and began to "fan fold" the edges of the red fleece tucking them in so they'd be on the inside on the hat. I pinned this to hold it in place and trimmed excess fleece as I went along. Once pinned in the shape I wanted, I sewed it into place just roughly tacking the edges down by hand and did a fine trim of the extra fabric.

The stalk of the mushroom is just a white bodysuit by Carters. I found a pack of like 5 on clearance at JCPenny's for about $5. Yay for extra bodysuits! (Can never have too many!)

The pants were a challenge.... I used an existing pair of my son's pants to make a pattern and made a basic "sweat pant" using green fleece. I cut grass shaped leaves from a double layered piece of fleece (so I ended up with 2 identical strands) and sewed them together.This just gave the leaves a bit more structure....they still don't stand completely up while my little guy is sitting cause of his chubby belly, but oh well. I added several of these grass strands around the waistband of his pants. I think you could easily do an adaptation of this if you aren't big into sewing or just want something quicker. You could easily make a belt with grass strands and use it with an existing pair of green sweats. You could easily just use fabric glue to achieve the same look as sewing. The fleece is really easy to work with.

To top off my son's costume, I made a caterpillar out of scrap green geometric fabric and brown yarn for the legs. I took a strip of the fabric and added balled up scrap pieces of fleece to shape the round body of the caterpillar. Then I tied a piece of yarn to hold the shape and provide the colorful bands of the caterpillar as well as legs I shaped them later when I was done. 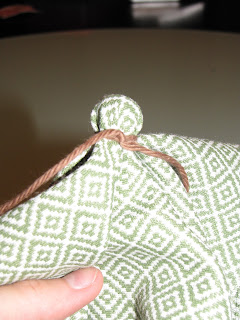 I continued making these round shapes till I had a total of 5 of them. I finished off the last one by folding the end fabric under and using the last band of yarn to hold it in place. 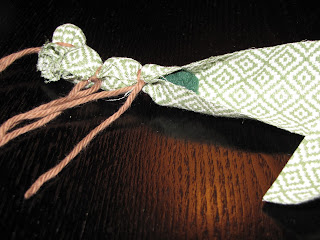 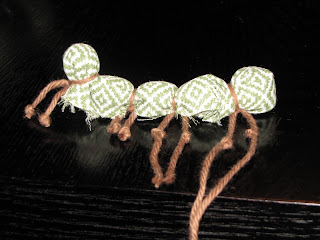 Lastly, I just knotted the yarn to make feet and trimmed the excess. I don't have the pins attached here, but later I just hot glued pins to be able to attach the caterpillar to his shirt, hat or wherever! So many fun adaptations you could to here...making different type bugs, etc I was so tempted to do a trail of ants up the leg and on to his belly (mushroom stalk) But with him not walking yet they would have just gotten lost in folds and rolls! But maybe you could do this idea! 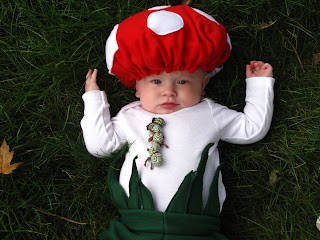 Email ThisBlogThis!Share to TwitterShare to FacebookShare to Pinterest
Labels: Costumes

Jessica
Wisconsin
I have always been immersed in a world of color, fabric, composition and flare and now want to explore this world in my own little home. Our son inspired me to take up sewing and design a nursery from head-to-toe with DIY projects. I looked through many blogs for inspiration and found lots. Now, it's my turn to share my creations in hopes of inspiring others. Best Wishes, and Happy Design! -Jessica